You are here: Home / News / CASEY STONER CUP – This Weekend
Back 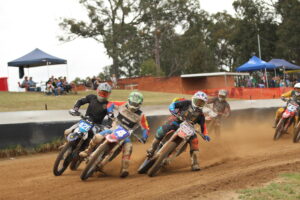 Local rider Boyd Hollis has the perfect opportunity to put his name alongside some big-name previous winners when he contests the annual Tradecore Industries Casey Stoner Cup dirt track meeting this Saturday, November 21.

After many months of inactivity the Kurri Kurri Junior Motor Cycle Club will swing back in to action as it again honours its former member Casey Stoner who went on to become Moto GP world champion.

The Loxford Park Raceway, situated in Dickson Road, Loxford, has hosted this Casey Stoner Cup for over a decade and already has an impressive list of previous winners.

Boyd Hollis has been runner –up in three of the last four years, but with no previous winners among the entries for this weekend Hollis has the opportunity to stand on the top step of the rostrum.

Hollis will likely face his toughest opposition from another local Angus Hutchinson who was in fine form at the recent NSW Senior Track Championships at Quirindi.

The Junior Cup has attracted a smaller line-up but there is no stand-out contender which should ensure plenty of close battles to resolve the outcome.

Several riders who have won Australian championships are among entries in the other junior classes.

With so little racing having taken place this year Saturday’s meeting has drawn riders from as far away as Albury, the Far South Coast and the Gold Coast clubs heading to Kurri Kurri for some action.

Practice gets underway at 8.30am followed by the first round of competition with the Cup finals wrapping up the programme in the afternoon.

For fans it is a cheap day out on Saturday with just a $5.00 per car entry fee with full canteen facilities available.